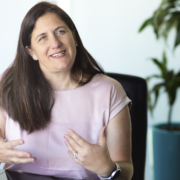 Technology has been a seed in the eCabs culture since the day it moved its first passenger from point to point. That seed today became a thriving branch. A fully-fledged transport technology division, composed of an exceptional team of technologists who are driving the engines for the internationalisation vision of eCabs. Kerstin Rizzo joined eCabs’ technology team as Head of Programmes a year and a half ago. She explains how fundamental technology has been in the growth achieved by eCabs in the past years. She also describes her role as a professional in a tech company.

“I wanted to become a chemist and had focused most of my studies on research. However, tech always interested me. I recall myself patiently typing code from various games’ magazines onto our ZX Spectrum a few moons ago”, she smiles.

“Eventually I read Chemistry and Computer Studies at University only to realise there were many tech opportunities available. By then, my choice was an obvious one which I never regretted.”

After 15 years as a systems’ analyst and a software developer, Kerstin spent another 10 years in management, leading several high-profile projects.  She then joined eCabs to realise she had just walked into an immensely disruptive and innovative culture.

“I must admit that I had my reservations. I wondered what my interactions would be like in a company which I thought would have a relatively heavier male presence. Only to find out that the workplace is also highly populated by fellow ladies. I had joined a company whose priorities are focused on innovation and a relentless pursuit for excellence. The vision is an ambitious one and it’s what makes the environment so inspiring to work in. ”

Technology remains fundamental in eCabs’ growth journey. As the organisation keeps investing heavily in this area, it bids to consistently improve its efficiencies in operations. Thus it ensures a seamless service delivery to its clients. It also brings about the ability to quickly adapt to unpredictable scenarios such Covid-19.

“Our technology also takes into consideration our growing driver base. Coordination of all the trips, tracking and timely pick-ups all depend on a robust technology infrastructure. This also enables us to lay out our long-term vision for the organisation. eCabs’ primary strategic goal is to internationalise its product portfolio. It is in the process of transforming its current technology to a cloud-based solution.

“One of the aspects that makes working at eCabs a unique proposition is the fact that we are a company intent on bringing a drastic shift in the country’s mobility patterns. Mobility remains a big challenge for Malta with a very particular and complex infrastructure. I am thrilled to be working on such challenges at a company with a vision of bringing a positive change in this aspect.

Being the only mobility company in Malta adopting an all-inclusive multi-booking channel model through the app, phone, web, social media and email, eCabs has made its service accessible to all to ensure mobility for everyone.”

In a world driven by data, new exciting challenges emerge to harness that power and make good use of it. “As our service grows, our models are increasingly helping us predict traffic patterns and trends. This allows us to keep offering a reliable service within the shortest time possible and at competitive prices. With aspirations of product development into the ‘Last Mile’ delivery segment my role becomes more fun and challenging as I help to translate these innovative business requirements into IT deliverables, which will essentially see customers and their parcels reaching their destinations in a quicker, smoother and more efficient manner.”

Agility in adapting is also an essential attribute as external factors can very quickly change the priorities. Covid-19 is a perfect case in point as Kerstin points out: “The surreal scenario that hit us in March 2020 had instantly shifted the priorities. But we are an amazing team and we managed to pull this through together, matching the speed and change in direction”.

The future is female

Turning back to the topic of women and IT, Kerstin is proud as a woman not only in an IT environment but also at a tech mobility company. But she also quickly admits that STEM subjects remain male dominated, and augurs that the future will see more women choosing Science, Technology, Engineering and Mathematics.

“The fact that I made it means that change is indeed possible,” she quips enthusiastically. “But this change needs to start from the very bottom, tackled from as early as kindergarten. There are plenty of innovative educational programs and science challenges that school children should be introduced and exposed to. It would help encourage a larger cohort of young women to take up tech-related jobs by also promoting women in these fields to serve as role models”.

Kerstin is interested and fascinated by astronomy. Her first inspiration as a young girl was Katherine Johnson, the famed mathematician who was instrumental in Nasa’s first manned space flights. Famed by the recent Hollywood movie Hidden Figures, Katherine Johnson carved her place in the history books. Kerstin says that there is no reason not to dream big and go for the achievement. “We’re only scratching the surface of possibilities here and that is what I love about this subject and this company. The future is bright – even in the face of the battles we face today.”

“People are the most important element at eCabs. In everything we do we seek a professional attitude and a consistent passion for the job to keep us at the forefront,” says Marvin Cuschieri, chief officer human capital and corporate services at eCabs.

Few might know that 20 percent of the 500 plus drivers employed by eCabs are women. That the company employs over 25 nationalities. That it has a team of in-house technologists. And a fully-fledged contact centre handling hundreds of customer interactions on a 24/7 basis.

Mr Cuschieri is a senior figure in the field of human resources, having occupied the role of CEO of the Foundation for Human Resources Development for six years. Now, as a member of eCabs’ top management team, Mr Cuschieri’s role is that of leading the human capital and corporate relations functions, covering the full spectrum of duties from manpower planning, administration, capacity building, systems implementation, business processes reengineering and facilities management.

“I say ‘recently appointed’ but really and truly, ‘recent’ is now already almost a year. I must admit, it took a bit of thinking to join eCabs. Transport and logistics was at the other end of the spectrum in my career and development pathway. But once I was exposed to the dynamic and technologically disruptive nature of the company and learned how the founders were devising to internationalise the business, I decided to embark on this journey and be part of this success in the making.”

He explains that eCabs is far from just a conventional cab operator. The company is considered as Malta’s largest and leading private transportation company. Since its inception, it has sought to revolutionise passenger mobility and how people commute on this highly congested island.

Over the last few months eCabs has ventured into events, expanded its corporate accounts portfolio and is now offering the full spectrum of people transport. It has also set up its own captive logistics software company, Cuorium. Adopting cutting-edge geo-spatial technologies, flirting with the application of AI in its operations and venturing into the uncharted territory of consuming big data to enhance its trip optimisation capabilities.

“HR is the only function that touches every single part of the organisation in all its aspects. From the drivers whom I consider as the front line of our organisation, to the contact centre agents. From the logistics controllers to the back office team, support service providers and the fully dedicated team of developers building and developing our unique ICT systems and infrastructure.”

Over the past 12 months, a lot has already happened within the company’s human capital structures.

“And so many more changes are coming up,” he adds. “Currently we are taking the company through a meticulous restructuring process at all levels. Perhaps one very important change is the way we are running our human capital. Being a strong believer in delegation, one of the very first steps was to build a stronger middle management structure that can bridge the gap between the vision and the front-line, while putting a stronger spotlight on the important aspects of the HR support services so vital for such a company employing such a large workforce.”

A more holistic way of training

He says the company is also developing a more holistic way of training its drivers and contact centre agents with better induction processes and feedback channels. Their logistic coordinators have been given the opportunity to follow academic diplomas in management, while the developers get the space they need to keep abreast with the dynamics of their specialisations.

“For instance, one of our developers was recently at the DevFest Berlin, an annual community-driven developer event organised by the 3 GDGs where he had the opportunity to attend a number of sessions across multiple product areas, all-day hack-a-thons, code labs, and more. The holistic and most unifying value that we are trying to instil is that all employees belong to a common vision and hence why they understand the importance of being professional in everything that they do and not to just meet customers’ expectations, but constantly exceed them. Quality is key for us, while passenger safety is paramount.”

Nourishing a positive work culture for people at eCabs

He points out that the company managed to build a strong recruitment pipeline by taking an innovative approach towards recruitment and striving to build models which can fit with those of the workforce.  “We have made efforts to reduce turnover by for instance allowing more flexibility, rewarding positive actions, creating a stronger team engagement, and instilling a strong sense of belonging.”

“The fact that the company operates on a 24/7 basis means it is in a position to give employees the flexibility they need, something other companies cannot offer,” he adds.

“What I love about HR? Seeing people grow within their roles at eCabs, teams of people pulling the same rope and coming up with their own initiatives, nourishing a positive work culture, having a diverse company not only in gender and age but also in terms of nationality.”

The Times of Malta